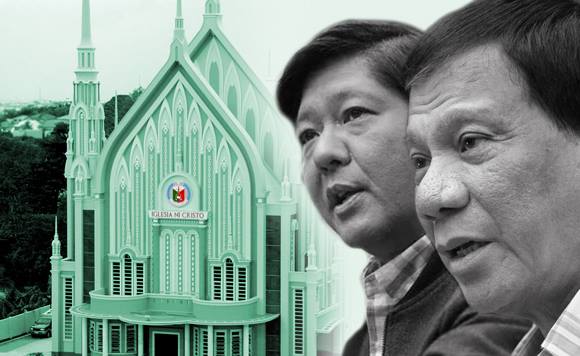 Iglesia Ni Cristo or the INC has finally made it official! The sect’s 1.7 million estimated voters will be supporting the candidacy of Davao City Mayor Rodrigo Duterte and Bongbong Marcos for president and vice-president positions.

Alongside Duterte and Marcos, the senatorial line-up include survey front-runners and re-electionists Franklin Drilon, Tito Sotto, Ralph Recto and Panfilo Lacson. Miguel Zubiri, Dick Gordon, Manny Pacquiao, Risa Hontiveros – all of whom have been ranking high in the surverys, were also backed by the INC.
Some of the unexpected additions were Joel Villanueva, Francis Tolentino, Sherwin Gatchalian, Martin Romualdez – as these candidates are circling the 10th to 16th positions in the recent survey.
The sample ballots are currently being distributed to members of the church, while the announcement was made in the Wednesday church worship in the Visayas region, May 4.
The said endorsement of Duterte was finally decided due to his popularity and lead in the surveys. According to reports, his decision was already made up prior to PNoy’s visit last Monday to make political appeal.

For senatorial candidates, the influential religious group throws its support behind the following:

Iglesia Ni Cristo, with its membership of close to two million, is known to practice bloc voting during elections.

In a statement, Pete Laviña, head of Duterte’s media group, said the endorsement by the Iglesia Ni Cristo “is a big boost to our campaign particularly to thwart attempts by the administration to cheat the elections.”

“This endorsement shows that Duterte’s advocacy for Tunay Na Pagbabago has resonated to almost all our people and all our church formations affected by the rising crimes and drugs, continuing corruption and government neglect, poverty and sufferings of our people,” Laviña said.

PH qualifies for US aid for infra, poverty reduction in 2021

Slovenian woman cut off her hand for insurance payout

Looking for a Job? Amazon is hiring 33,000 new employees with an average compensation package worth $150,000

Beware: Hathaway Credit is a Scam and Fraud

A Must Read: Why Duterte ?

Hundreds of People Flock Over Manila Bay for Picnic and Swimming

Video of LP get busted for Cheating in Mindanao

ABOUT US
Global is your news, entertainment, music fashion website. We provide you with the latest breaking news and opinions.
Contact us: info@global.favradiofm.com
FOLLOW US
© hosted by: www..hornhost.com
MORE STORIES